Article 26 of the SNUC (Brazilian System of Conservation Units) recommends that when different types of protected lands (parks, ecological stations, extractivist reserves and indigenous lands) occur in proximity or overlap, a mosaic of these areas be created with integrated and participative management to preserve biodiversity and value the socio-cultural diversity and sustainable local development.

The project Mosaic of Protected Areas of the Lower Rio Negro aims to decrease the isolation and improve the administration of conservation unit by integrating the management of areas that are physically connected and incorporating their social actors. The process incorporates participative and shared management within a single group of stakeholders, which facilitate communication, interaction and management projects for territorial development and conservation.

The Mosaic delimits an area that is a reference point for local socio-biodiversity, a factor that can promote development for the region as a whole. IPÊ seeks to link the consolidation of these areas with the promotion of local sustainable development, including services and production chains among the traditional peoples.

The knowhow and ecosystems management strategies of local populations are socially and ecologically efficient and should be given consideration in public management programs. Thus, it is important to create an ethno-development proposal in which conservation units of the Rio Negro watershed be a major focus. This will attract resources and strengthen regional identity, leading to increased income for residents and also guarantee food security.

The Mosaic was formalized in 2006 with support from Fundo Nacional do Meio Ambiente (National Fund for the Environment) through initiatives for the creation of a Managing Council comprising the protected areas of the region and the promotion of regional development. As the Project progressed, new potentials and proposals for strengthening development were identified:

Create and implement a governance of the Protected Areas of the Lower Rio Negro Mosaic that incorporates communities in its management and propose instruments to value the services, products and knowhow in the Mosaic.

The Mosaic of Protected Areas of the Lower Rio Negro is a region recognized for its importance to biodiversity and socio-diversity conservation. The various protected areas comprising this area are within the Central Amazon Ecological Corridor and the Biosphere Reserve Nucleus Zone. This region includes the municipalities of Manaus, Novo Airão, Iranduba, Barcelos and Manacapuru, which together comprise a population of 1.8 million (IBGE, 2007), and another eighty riverine and indigenous villages that survive through agriculture and extractivist activities (primarily wood), but are also involved in tourism and sale of folk-art. Together, these areas total approximately eight million hectares of black-water ecosystems and tropical forest distributed within eleven conservation units. The Waimiri-Atroari tribe has also shown interest in participating in these initiatives. 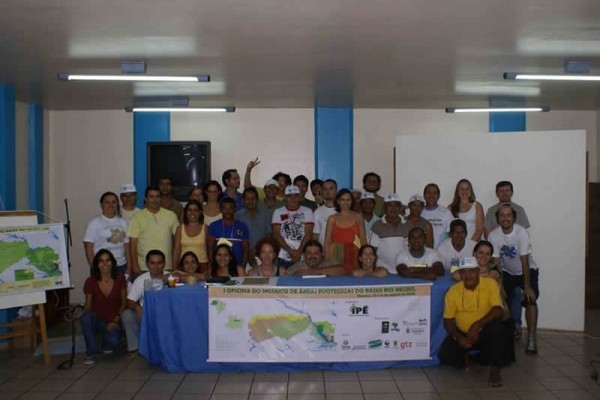