Mata Atlântica I Amazonia I Pantanal I Cerrado
Projects Muneo 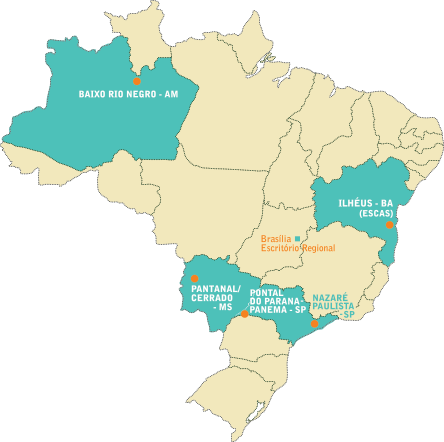 IPÊ is headquartered in Nazaré Paulista, less than 100 kilometers form the city of São Paulo. This municipality is known for its scenic natural beauty and is strategic for the conservation of socio-environmental resources, including water and Atlantic Forest. Nazaré Paulista harbors a portion of the of the Cantareira System reservoirs, which are responsible for providing water to nearly ten percent of the Brazilian population. IPÊ develops conservation research and environmental education projects in the region. The primary themes of these initiatives are: restoration of the Atlantic Forest, conservation of wild mammals, ecosystems services and sustainable business.

The Pantanal is one of the largest continuous wetlands in the world, covering approximately 160,000 km² of floodplains. The vegetation is influenced by four biomes: the Amazon, Cerrado (predominant), Chaco and Atlantic Forest. Here, IPÊ has started the National Initiative for the Conservation of the Brazilian Tapir.

The "Grande Reserva do Pontal do Paranapanema" (Great Reserve of the Pontal do Paranapanema), located in western São Paulo State, was created to in 1942 to preserve 247,000 hectares of forest. During the years that followed, however, this conservation area underwent intense habitat fragmentation resulting from agrarian conflicts and occupation of large tracts of land by ranchers.