The main Whitley Fund for Nature (WFN) award – the Whitley Gold Award – was given to Patrícia Medici, coordinator of LTCI – Lowland Tapir Conservation Initiative, a project from IPE, the institute that she co-founded. Leading conservation actions for the lowland tapir and its habitat for 24 years, Patricia’s work resulted in the creation of the world’s largest dataset about the species. Her contributions for the knowledge about the species and for the progress of science have inspired students and researchers from several countries.

Patricia’s actions combined field research, conservation practices, environmental education, communication, training, and capacity buildings. Added to these actions, there is planning for the reduction of threats and establishment of public policies that benefit the species and its habitat. The outcomes of her work have impacted not only the lives of the tapirs but also of other animals, plants, and humans living in several biomes: the Atlantic Forest, Pantanal, Cerrado, and now with the prize, the Amazon.

The lowland tapir is the largest terrestrial mammal in South America, and it is considered a living fossil as its lineage has survived through several extinction events along millions of years of evolution. However, the species currently faces several threats caused by humans, including the destruction and fragmentation of its habitat due to the expansion of large-scale agriculture, cattle ranching, roadkill, hunting, mining, among others.

“When we support the cause for the conservation of the lowland tapir, we are also defending our own lives, our natural resources and our health. Considered to be the gardener of the forests, the tapir promotes forest renewal and restoration though seed dispersal. Several plant species exist only because their seeds pass through the guts of tapirs. The tapir “plays” with the plant composition and diversity of the forest and is largely responsible for maintaining the integrity of these environments”, explains Patricia. 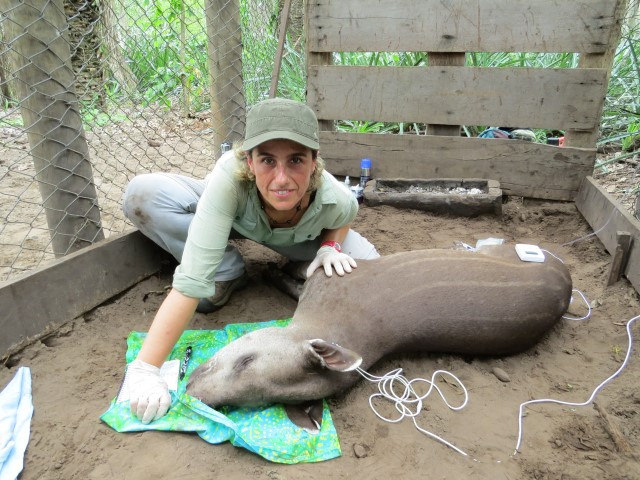 Despite being very important for the ecosystems it occurs, in Brazil the Portuguese
word for tapir, “anta”, is a pejorative slang for a person that is not intelligent. To solve this problem and to spread more information about tapirs, Patricia, her team, and supporters of the cause have created the hashtag in the social media: #antaÉelogio.
For the researcher, communicating with the large audience is essential for the
academic developments to reach more people and for a better comprehension about the importance of biodiversity, not only for wildlife but also for humans, that are part of biodiversity.

To illustrate this, Patricia mentions the study of LTCI in the Cerrado of Mato Grosso do Sul state, that found that pesticides and roadkill have contributed to the reduction of the tapir population in the region.

“We need to consider that both pesticides and roadkill impact the wildlife and also us humans. Many people are affected by the excessive use of pesticides. Our studies also show that many people are killed in vehicle crashes with tapirs, mainly due to the lack of safety measures that avoid road crossing by these animals, and also lack of adequate signs. Together with the state and federal public departments, we are using our database to request the implementation of mitigation measures in the roads where tapirs are frequently killed. For obtaining this kind of information we need science and scientists, that also help to apply this knowledge for the good of both humans and wildlife”, defends the forestry engineer.

Whitley Fund for Nature (WFN) has supported Patricia’s work in the last 12 years, greatly contributing for the expansion of the LTCI actions all over Brazil. Patricia began her field studies in the Atlantic Forest in 1996, and with WFN help, have expanded her efforts to the Pantantal (2008) and the Cerrado (2015).

The Whitley Gold Award won today will be used for bolstering LTCI’s actions all over the country. In the Atlantic Forest, part of the resources will be used for a reevaluation of the tapir population in the Morro do Diabo State Park. In the Pantanal, tapirs will continue to be monitored using radio telemetry and camera traps. In the Cerrado, the work will be focused in avoiding roadkill and also solving the pesticide contamination issues and hunting, in a landscape that is rapidly changing due to the agricultural developments in Brazil. The new work in the Amazon will be aimed at mitigating the threats to tapirs in the southern part of the deforestation arch, in Mato Grosso and Pará states.

Edward Whitley, founder of WFN, said: “Patricia’s work is vital to fight deforestation in Brazil and to protect this amazing species that is the tapir. Her dedication to research, education, and capacity building are a brilliant example of an effective work. Patricia Medici is a strong voice in conservation in Brazil and in the world. We are privileged to still be able to support this cause”